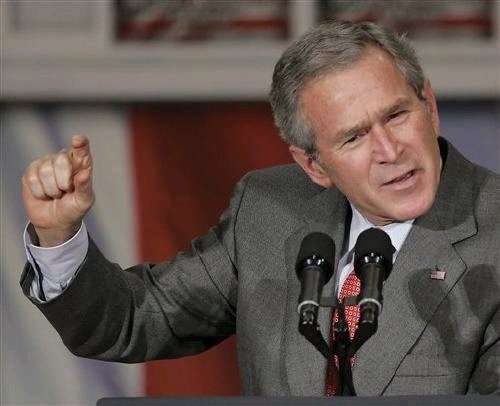 Before leaving C-SPAN’s poll of presidents, I need to get two more items off my chest. One is about Abraham Lincoln, the winner at #1. Can we please take off the rose-colored glasses and treat him like a real person? I will get to this in my next post.

The other is about George W. Bush. Let’s talk about him right now.

When I first saw the final C-SPAN list two days ago, I quickly noticed the difference between me and the group over GWB, and I wrote this:

Finally, there is George W. Bush. The C-SPAN group places him in the bottom ten at #36. I rated him even lower, as third worst at #41. This rating obviously is the most speculative of the bunch. We still don’t know the outcome of the wars Bush started and the economic cataclysms begun under his watch. But, to my mind, the potential long-term damage Bush has done to this country far out-paces the likes of a Warren Harding, Millard Fillmore, or Frankling Pierce. Unlike these other disappointments, George W. Bush was both bad AND consequential.

Let’s be clear. I enjoy revisionist history. In my book BOSS TWEED, I was happy to restore the reputation of America’s most corrupt pol ever, showing that Tweed, while stealing the City blind, was also a big-hearrted man who helped immigrants, built New York, and was victimized by unscrupulous “reformers.” But that didn’t mean be wasn’t corrupt.

It is no Liberal fad to say that George W. Bush was one of the worst presidents ever. Facts are stubborn things. Bush might be a sincere nice man who loves his family, but that doesn’t change the bottom line. How could the C-SPAN group rank him at #36? This son of priviledge is once again being let off the hook with a Gentleman’s C?

True, a rank of 36 is no compliment. It places Bush in the bottom 10, and nobody argues that the bottom two, Andrew Johnson and James Buchanan, don’t thoroughly deserve those spots.

The difference between 3rd worst (my rank) and 7th worst (the C-SPAN group’s rank) may seem small, but at stake is the historical truth. The higher grade elevates Bush above four other Presidents who certainly had failures and fell far short of being role models, but who simply did too little in office to earn the bottom spots. Specifically:

George W. Bush was not a small President. He mattered. He was not mediocre. He was bad. The most important national challenge of our lifetimes, the attack of September 11, 2001, came on his watch. He made decisions that had consequences. The result was a string of disasters that is depressingly well known: two unfinished wars, a debt explosion, a financial collapse, a list of demoralized, ineffective Federal agencies, a sleazy re-election, inflamed wedge politics, the use of torture, the loss of global standing, and so on goes the list.

The C-SPAN group gave Bush bottom marks for Economic Management and International Relations, but it saved him from the cellar with C-level grades for three catch-all categories: “Crisis Leadership,” “Vision/ Agenda Setting,” and “Pursued Equal Justice for All.” I don’t buy it.
Ranking President Bush is speculative because the trail is still fresh. He just left office a few weeks ago, his wars are unfinished, his policies are still unfolding. Giving him a mediocre score may allow historians to keep their options open, to hedge their bets in case something in his legacy goes unexpectedly right. I think the record is clear enough to start him off at the near-bottom. If things go his way in the future, so be it.
Thanks for listening. –KenA