Mitt Romney may get a nice bounce in public opinion polls from announcing 42 year-old Wisconsin Congressman Paul Ryan as his vice presidential running mate.  And why not?  Ryan, though very conservative, has many appeals.  He is young, energetic, articulate, and, as chairman of the House Budget Committee and author of its recent controversial ten-year plan, has made himself an intellectual leader of Congressional Republicans on the financial issues.  He will give Joe Biden a tough VP debate come October, bring knowledge on fiscal matters, and unify the Republican Tea Party faction behind Romney’s campaign.

Already, the optics seem to work: Romney the father figure, Ryan the smart protege (about the same age as Romney’s own eldest son Tagg).  What could go wrong?

Watching the announcement this morning, three comparisons came quickly to my mind, all with the same idea, but very different ends:

Eisenhower and Nixon, 1952:
Probably the best use of father-son optics in recent decades was engineered by General Dwight Eisenhower in 1952 when he picked a smart, young, 39-year-old California U.S. Senator named Richard M. Nixon as his running mate.  Eisenhower not only was relatively old — 62 years old — but a political newcomer, a career soldier.  Nixon, like Paul Ryan, was a rising intellectual leader of the Republican right who had starred in House and Senate anti-Communist investigations.  He offered Eisenhower a bridge to the Party’s Congressional wing and beautiful optics as a young family man with two cute daughters.

Nixon weather an early storm over a financial scandal resulting in his famous “Checkers Speech,” (click here to see it).  But after that, the strategy worked.  Eisenhower and Nixon won two terms, and it wasn’t until later, when Nixon sought the Presidency on his own, the Nixon’s full set of eccentricities came into full flower, culminating in Nixon’s 1974 resignation in disgrace from the hite House   in the Watergate scandal. 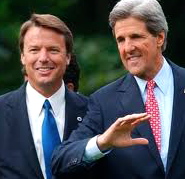 John Kerry in 2004 also decided to pick a younger man, though the age difference between him and campaign rival John Edwards was much smaller than Eisenhower and Nixon.  Kerry was 61 years old in 2004, while Edwards was 51.  Still, Edwrad, a North Carolina U.S. Senator and acomplished courtroom lawyer, had made a good impression during the primaries that year and brought energy to the ticket.

The criticisms of Edwards came later.  Many backers were disappointed by Edwards’s lackluster debate in October 2004 against Republican Dick Cheney.  And since then, Edwards has shown himself to be a remarkably duplicitous character, chearing on his wife Elizabeth during his 2008 presidential campaign as she was dying with cancer and covering it up with campaign contributions, resulting in the recent criminal trial.

But to my mind, Ronald Reagan, as usual, made the best decision in this type of situation.  Reagan’s list of potential running mates in 1980 included a particularly smart young Michigan Congressman named David Stockman, 34 years old but already an intellectual leader of House Republicans on budget issues.  Reagan decided not to make Stockman his running mate — Stockman wasn’t old enough in any event.  He chose for the job a more experienced hand, future president George H.W. Bush.

Instead, Reagan gave Stockman a more appropriate role in his White House: Director of his Office of Management and Budget.  This allowed Stockman to take full direct control of Reagan’s early effort to cut taxes and cut spending, a major accomplishment of Reagan’s presidency.

Stockman mostly did a fine job, but he was too much a purist.  When Congress passed Reagan’s tax cuts in 1981 but failed to adopt enough spending cuts — producing unprecedented budget deficits throughout the 1980s — Stockman went rogue. In gave an interview to Atlantic Monthty  in which he openly criticized the outcome and acknowledged “None of us really understands what’s going on with all these numbers.”   Reagan took Stockman “to the woodshed” — yes, that’s how they described it.  Stockman ultimately had to resign, and afterward, he wrote a book called The Triumph of Politics: Why the Reagan Revolution Failed.

By making Stockman his OMB Director rather than VP, Reagan had made the best managerial choice.  He allowed Stockman to focus on his signature budget issues, but where Reagan could jettison him the minute he malfunctioned.

Bright young man can be great things, but pose risks as well.  Will Paul Ryan be a purist like David Stockman, pushing candidate (or president) Romney farther right then he really wants?   Will Ryan be a secret cad like John Edwards, with lingering skeletons in the closet?  Will he serve faithfully like Richard Nixon, then let his own ambition take control when he gets the chance to run for himself?

Most likely, it’s none of the above.  History never really repeats itself; each situation is new and different.   For now, let’s hope that Paul Ryan is just what he seems, a smart, idealistic, articulate advocate of conservative fiscal views who, agree with him or not, is ready to defend them in good faith and good spirit.  Let the games begin.