﻿﻿  Illinois has had its problems with elected officials, but it is also the home of Abraham Lincoln and Barack Obama.  In between those two Illinois Presidents, great public servants from the state have included five generations of the Stevenson family.  Most recently, Adlai E. Stevenson III served as United States Senator from 1970 to 1981, following terms as Illinois State Treasurer and representative to the state legislature. His father was Illinois Governor and the Democratic candidate for the presidency in 1952 and 1956, losing both times to Dwight D. Eisenhower.  After that, he served as U.S. Ambassador to the United Nations, memorably confronting the Soviet Union over the Cuban Missile Crisis. 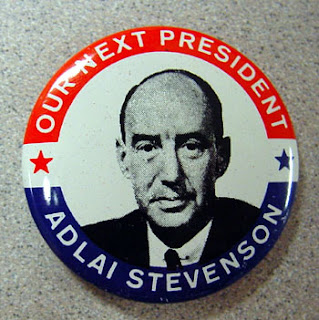 Going back further, Senator Stevenson’s grandfather held state office in Illinois and his great-grandfather was a Congressman and Vice President of the United States under Grover Cleveland. His great-great-grandfather, Jesse Fell, was Secretary of the Illinois Republican Party. He proposed the historic Lincoln/Douglas debates and persuaded Lincoln to run for President. He did not run for office himself but set his family an example of citizen statesmanship that still resonates today.

Senator Stevenson is currently active through the Adlai Stevenson Center on Democracy, with an upcoming event on the Presidential Debates featuring my father, Newton Minow, whose work with Governor Stevenson during his Presidential campaigns in the 1950s formed the basis of the current system of Presidential debates.

The Stevenson family has a tradition of collecting thoughts and quotations about politics, history, and related topics, and Senator Stevenson has now edited what the family calls The Black Book with 150 years worth of insights and advice.  It is an enthralling compilation, rewarding a quick look at a random page or careful study of chapters on topics from “Congress and the Legislative Process” to “Religion and Politics,” “Lincoln, War, Peace,” and even poetry — a treat for fans of history, politics, and just good reading.

I was delighted to have a chance to interview Senator Stevenson, for whom I worked as an intern in the summer of 1973, when I was in college and the Watergate hearings were underway.   Here is some of what he told me:
The Senate

AES: In the Senate I entered, there was no partisanship. We worked across the aisle – remember Nixon supported Environmental Protection, product safety, OSHA, even supported wage and price controls. The center was broad. Reason still reigned – and some wise men (yes, mostly men). Nowadays anybody can be elected without sufficient money or notoriety. The process is paralyzed. Civility broke down as ideology and money invaded. Now a handful can stop consideration of measures and paralyze Congress. I haven’t observed any favorable changes.

NM: Do you think there is any way to limit the impact of the Supreme Court’s Citizens United decision on corporate money in politics?

AES: Yes. The Court may reconsider the issue. Campaigns could be shortened – and ballots to reduce costs. The Federal Communications Act might again be enforced so licensees of public air waves are held to some public, convenience, and necessity standards as in the past. Partial public financing may be the most doable solution. I am skeptical about a Constitutional amendment and proposals to take limits off contributions to parties and candidates to counter super PACs. We could also fund public TV and radio adequately as other democracies do. We just had an Adlai Stevenson Center program on the subject but I did not hear any easy answers. 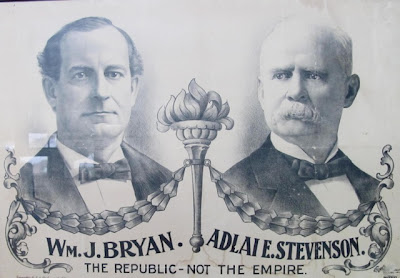 NM: There are a lot of wonderful quotes in the book. Did any of the selections collected by your father surprise you? Do you have a favorite?


AES: Remember, the quotations came from everywhere and were added over four generations, probably most by me. As I say, every page uncovers a surprise that I added for illustrative, not so much argumentative, purposes. (The open letter to Santorum was ahead of its time like others). I have many favorites, for example:

NM: Your father was selected as the Democratic Presidential candidate in a brokered convention. Are there advantages to that system over the primaries? 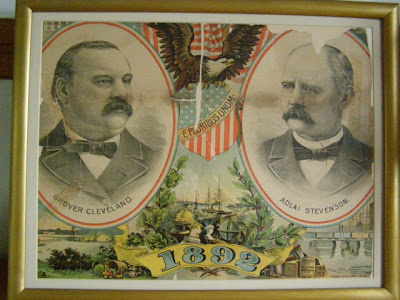 AES: “Brokered” is pejorative. Given the present spectacle, old-fashioned conventions of party leaders with some knowledge of the candidates, the demands of public office and the issues are preferable. Those conventions debated issues like civil rights in 1948 and war in 1968. They adopted platforms after extensive hearings and debates – Democrats driving much of the South out of the party in 1948 with a civil rights plank. (I was a sergeant at arms – that was security!) Now conventions are media events. The New York Times reports that the National Committees have each already raised over $100 million each for their respective media events. All great presidents during the span of The Black Book (and some not so great) were chosen by old-fashioned conventions. Clinton was the first Democrat of the new era of money, tactics and the deal. The jury is still out on Obama, but he was an accident in his Illinois elections – all his opponents, Democratic and Republican, self-destructed.


NM: How have social media and the 24-hour news cycle changed politics?


AES: They are undermining established sources of political authority here and elsewhere. Campaign staffs spend their time answering charges from anywhere in the blogosphere and responding in kind. For these anonymous assassins there is no accountability. I can see plusses but on balance it looks negative. The Arab spring is fascinating, but we may be disappointed by the results. Real issues were never more complex so we debate contraception and gay marriage, which are better suited for 24-hour news. The world is appalled by the political spectacle.

NM: The quotes by your father on page 55 seem particularly apt in describing the current political climate.

AES: Judging from responses to my TV and radio interviews, book signings and speeches, most people would respond to a candidate who leveled with them and did so with reason and truth. I sense near desperation among voters. But how to appeal to the narrow base needed to win the nomination in this “democratic” process? Once nominated a candidate might get enough time, even if bought, for face-to-face talks with the American people as my father did.

AES: Humor is revealing. It can come naturally and spontaneously to the politician of light heart and clean conscience. He does not have to check to make sure it is consistent with his “message” or get advice from consultants. It can be effective as a means of telling the story, denigrating the opponent without being mean-spirited and conveying the person. It makes the audience feel good. Lincoln was a great humorist. The absence of humor today reveals a different condition and candidate.


NM: Is there a politician today who reminds you of Adlai I or Adlai II?


AES: The short answer is no. Adlai II [who ran for President in the 1950s] was a student of the world from on-the-ground starting as a college student. Now that is more important than ever — to see this world from within it. I know there are many good and decent public servants out there. But no Adlai II. Let’s face it, even in my time sensation attracted media attention from the US press – not the complex issues. Not even terrorism when I was conducting its first in depth study, predicting it and introducing measurers to control and prevent it. Make no mistakes, or worse yet, get it right and you don’t get much if any attention from mainstream media.

My generation produced some strong candidates like Ed Muskie and Phil Hart. I don’t see them today. Lincoln, the Whig and supporter of a strong central government, has been traded in for Reagan. The Dick Lugars are threatened, or like Olympia Snow resign. I hope I am wrong. I do see an occasional well-qualified Congressional candidate.


NM: What was the best advice you got from your family about politics?


AES: None — except by example. We rarely discussed politics. My father advised establishing a career at the law to fall back on in times of need — as he did. It was advice I rejected when Richard J. Daly gave me a chance to run for the legislature and lead 236 at-large candidates! I am so glad I rejected Dad’s advice. He lived just long enough to see the name carried on. We even out-polled an Eisenhower in that 1964 election! Besides, I wanted to start at the bottom.

NM: You served during one of the most significant political crises in American history, the Watergate
hearings and impeachment. What did you learn from that experience?


AES: I did not learn anything from Watergate. I had warned the Democratic caucus about Nixon, somewhat presumptuously. The system worked brilliantly. Sam Ervin was heroic in the Senate. The House, led by Pete Rodino, rose to the occasion. Nelson Rockefeller became Vice President. I had a hand in it. I reached an agreement with Elliott Richardson which was publicized during his confirmation hearing for Attorney General. He was pleased to agree publicly to this agreement as a condition of his confirmation . It set out the powers required for the independence of a special prosecutor.. To comply, he resigned when ordered by Nixon to control the special prosecutor The Saturday night massacre followed. The system worked. Today, Newt Gingrich, an adulterer, is chastised by the full House, forced for the only time in history to resign the Speakership, fined $300,000, resigns to become a high-paid unregistered lobbyist for Fannie Mae, and then runs for President and after he had tried to impeach Clinton!. When I was chairman of the Senate Ethics committee, the mere pendency of an investigation terminated one’s career. I saw it happen.


AES: I think my chapter on Finance says it all. I was surprised to hear President Obama refer to Social Darwinian economics — as if he had been reading the Black Book! It is back, but this time there is little reaction and the country is in a self-induced economic decline. Benefits are cut as unemployment rises. Resources are invested in unwinnable wars to undermine other people also, as in Iraq. China rises and makes a conscious effort to reduce the inequalities, a big challenge. The Epilogue of the book puts it in historical context. For Lincoln, Union required hope and opportunity for all. Government was of, for and by ALL the people.

Nell Minow is co-author of three books about corporate governance and the author of one book about movies.  She reviews the week’s movies and DVD’s and writes about media and pop culture on her Blog.  Visit her at www.moviemom.com.