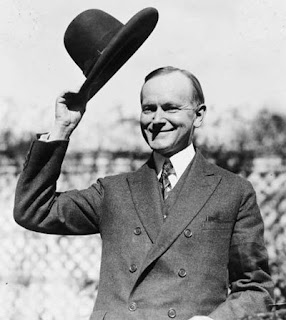 Who was the worst ever President on on the stump?

With the now-not-so-new modern miracle of You-Tube rare old videos pop up all the time. As a result, we get to see just how bad some of the pre-TV Presidents were at trying to talk.

Take a listen to Calvin Coolidge chatting away on the White House lawn in 1924.

“Silent Cal” was not a terrible President. In the C-SPAN president’s poll this year, I ranked him solidly mediocre, as number 20 out of 43.
He presided over the Roaring Twenties and Coolidge Prosperity. He left town just before the bubble burst in the 1929 Stock Crash.
Coolidge was an “Accidental President.” Republicans nominated him to run for Vice President in 1920 after Coolidge, as Massachusetts Governor, took a strong stand in the 1919 Boston Police Strike. When President Warren G. Harding died of food poisoning in 1923 at the height of the Teapot Dome Scandal, Coolidge took the top job.
Watching Coolidge talking from notes in his raspy voice makes you cringe. Could he ever be elected to anything today? We judge public figures today so much by the TV standard, how smooth they appear, how stylish they look, how well they speak. Is it all fluff?
Enjoy the time capsule. Here”s the link.
href=”Calvin’>http://www.youtube.com/watch?v=5puwTrLRhmw”>Calvin Coolidge 1924.

5 thoughts on “Gasp! Calvin Coolidge trying to give a speech.”